Everything you ever wanted to know (and more) about Platinum and its use in jewelry.

Platinum is one of the rarest and most durable precious metals. Platinum’s rich, white luster enhances the brilliance and will maintain its shining luminosity forever, unlike other white metals which can, in time, turn yellow or tarnish.

Platinum belongs to the noble and precious metals family. It is resistant to tarnishing and discoloration due to chlorine and other chemicals. These factors, along with its strength and white luster, have made platinum an increasingly popular choice for jewelry, either on its own or as the setting for diamonds and other precious gemstones. Platinum jewelry does not fade or tarnish and keeps its looks for a lifetime. Platinum’s purity makes it hypoallergenic and ideal for those with sensitive skin.

All the platinum ever mined would fit in the average living room.

Platinum is rare, the coveted treasure of discerning individuals. Platinum is one of the strongest and most enduring metals. Some of the world’s greatest treasures are set in platinum, such as the Hope Diamond. It is also one of the heaviest, weighing 60% more than gold. The word platinum sometimes enjoys a cachet higher even than gold – witness all those platinum albums and credit cards.

Platinum jewelry is the perfect choice for a lifetime of everyday wear. Its density and weight make it a durable jewelry metal. Platinum does not wear away and holds precious stones firmly and securely. Like all precious metals, platinum scratches. However, the scratch on a platinum piece is merely a displacement of the metal and none of its volume is lost. In addition to its strength and density, platinum has another remarkable quality – pliability.

Platinum is a symbol of true love, purity, rarity and strength. These qualities of platinum are equivalent to the ideals of eternal true love. All over the world, engagement rings, wedding bands and anniversary rings made in platinum symbolize the everlasting endurance of love. Platinum is pure, an expression of integrity, a reflection of inner truth. Platinum’s purity endows it with a brilliant white luster. This helps to reflect the true radiance of diamonds.

In the United States platinum is usually marked: PT or PLAT. In Europe, platinum is identified by the following marks: 950 or PT950.

The History of Platinum in Jewelry

Platinum has been used in jewelry only since the 19th century. So platinum engagement rings are fairly recent.

The Italian-French physician Julius Caesar Scaliger discovered Platinum in 1557. In 1590 Spanish Conquistadors discovered a white metal in the rivers of Equador. Not realizing its superb qualities, they named it contemptuously platina (little silver) and threw it back into the river to ripen into silver. In 1912 white gold was “invented” in Pforzheim, Germany, as a substitute for platinum.

These properties piqued the interest of a Swedish assayer named Scheffer who, in 1751, recognized platinum as the seventh element known to exist up until that time. He was also the first to successfully melt platinum. 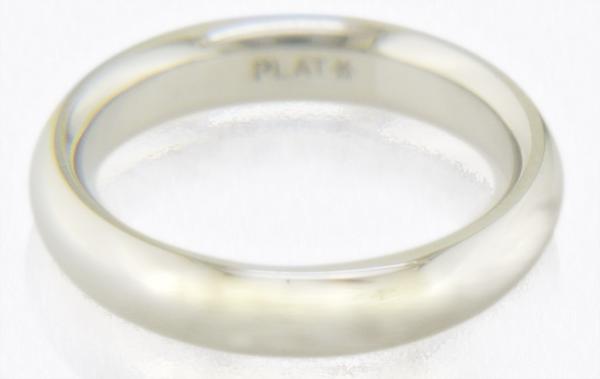 The ancient Egyptians were the first to use it in jewelry, however, widespread knowledge of the white metal stretches back only a few hundred years. Despite being worked with some skill by South American Indians over 1000 years ago, it was not until after the Spanish conquest of the New World during the fifteenth and sixteenth centuries that news reached Europe of a new white metal with unusual properties. So convinced was he of its special qualities, Louis XVI of France proclaimed platinum the only metal fit for Royalty.

Platinum has a high melting point (3190 F or 1755 C) which limited its jewelry use until the invention of the oxyhydrogen torch in the mid 1800’s. In the late 1800s platinum-mania swept through Europe and Russia as Kings, Queens and Czars adorned themselves with anything and everything platinum. Early in the 1900s, the popularity of platinum reached U.S. soil and captivated the American public. At the outset of WWII, however, the US government declared platinum a strategic metal, disallowing its use for jewelry. By the end of the war platinum had temporarily become a lost art.

All the platinum ever mined would fit in the average living room. Rarer than many other metals, only about 133 tons of platinum are mined each year (compared to 1,782 tons of gold).

An asset like a platinum engagement ring needs the care and attention it deserves especially for its symbolic and sentimental value. Although platinum possesses excellent qualities, it is advisable to follow a few simple steps to help keep your platinum ring looking its best. You should avoid wearing it while doing manual work, at gym or playing sports or while working with abrasive substances. One ought to remember that platinum is not scratch proof. Similarly you should not wear it while handling strong acids. Store it in a fabric-lined box away from other pieces so that it does not get scratched. If required, it should be polished once in awhile by the local jeweler to restore its new look.

However, despite its durability, platinum jewelry needs to be properly cared for. Store your platinum jewelry separately and with care, not allowing pieces to touch each other because even platinum can be scratched. Signs of wear such as scratches can eventually appear on platinum. However, due to the metal’s durability there is usually little metal loss from the scratch. If visible scratches do appear, your jeweler should be able to polish the piece. Platinum is usually then plated with rhodium to give it a bright finish.