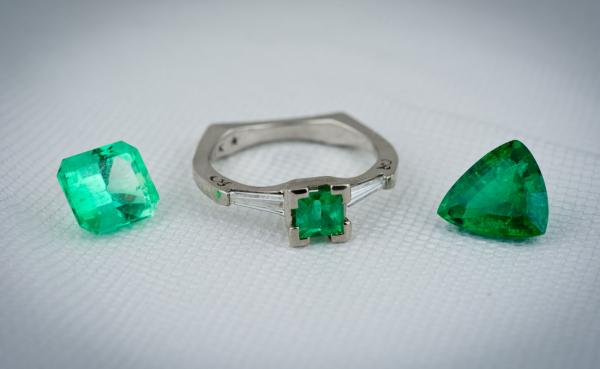 Springtime exudes life, full of bright colors and renewed energy. Emerald, May’s gemstone captures this enthusiasm for life in rich elegance. Spring and green symbolized faith and fertility. Emerald then became one of the green stones representing spring, a time of birth. This brilliant green stone reinforces love and creates harmony in the family. For most gems this would be sufficient praise but emeralds are steeped in history, superstition and lore.

A symbol of love and rebirth, the emerald has been treasured for over 4,000 years. Emeralds are said to improve the intelligence as well as the heart. They give those who wear them the gift of eloquence They are believed to protect marriages, enhance fertility, ease childbirth, cure epilepsy and nervous breakdowns.

According to legend, emeralds strengthen the owner’s memory, quicken the intelligence and assist in predicting the future.

Emerald is believed to be a symbol of faith, loyal friendship, and immortality

Emerald’s benefit to the eyes scientists explain that the human eye is more sensitive to green than to any other color thereby making it easier on the eyes. Pliny said that emeralds were the only gemstones that delighted the eye without fatiguing it. In fact, Emperor Nero wore emerald sunglasses to watch the gladiators.

History is filled with other people who admired emeralds. Cleopatra treasured her emeralds more than all other gems. Pliny, declared that “nothing greens greener” than emeralds. The Moguls of India, including Shah Jahan, the builder of the Taj Mahal, loved emeralds so much they inscribed them with sacred text and wore them as talismans.

The early Christians valued the emerald as a symbol of resurrection. The emerald was also believed to be one of the twelve stones, representing the twelve tribes of Israel, to adorn the breastplate of Moses. The ancient Egyptians believed emeralds stood for fertility and rebirth.

Dedicated to Venus, the emerald was a symbol of the reproductive forces of nature. Emerald was used in the Middle Ages to foretell the future and was thought to ward off evil sorcery and cure demonic possession. The emerald was thought to have the mystical ability to foretell the future, improve memory, and enhance persuasiveness. An emerald was often tied to a woman’s thigh to ease childbirth. Emerald amulets were worn to prevent epilepsy, avoid panic, and stop bleeding.

Emerald is believed to be a symbol of faith, loyal friendship, and immortality. Emerald is closely associated with love, and with contentment in marriage and by changing its color is said to reveal the inconsistency of lovers. This brilliant green stone reinforces love and creates harmony in the family. One poet wrote:

“Who first beholds the light of day,
In spring’s sweet flowery month of May,
And wears an Emerald all her life,
Shall be a loved, and happy wife.”

Emerald’s beauty is so appreciated that inclusions that would make other gems nothing more then rocks are treated with distinction. Heavy included patterns are sometimes referred to as “gardens”, and in fact lend a great deal of interest to emeralds.

Home »
Fine Jewelry U »
Gemstones »
Gem in the Spotlight: Emerald