Jade has one of the richest heritages of all gemstones. People have been using jade from as early as 6,000 BC, and it has been an incredibly important part of Asian, Central American, and North American history ever since. But, what is jade, and what has given it such a prominent place in human history?

The term “jade” actually refers to two completely different gems: nephrite and jadeite. These are actually two unique mineral species, but since they have been confused for so many years, and are similar in many ways, they are both referred to by the blanket term “jade”. Both materials are silicates that have exceptional toughness, can be carved, and can be taken to a high polish. Nephrite is commonly found in a darker olive green color but can also be very light green, orangey-red, black, and yellowish green. Jadeite can come in many different colors including pink, purple (often called lavender jade), blue, black, white, and the most valuable/desirable color: a vibrant green. The finest of all green jadeite colors is a saturated emerald green that is almost transparent, and it is called “Imperial Jade.”

Jade is one of the top selling gems in Asia, but its beauty and cultural importance have landed it a spot as one of the most important items in the global gem market. In fact, jadeite is often sold by the individual piece instead of by weight like most gems. This is because even small differences in color or imperfections can drastically change the value of the gem.

History and Lore of Jade

Jade’s incredible toughness has made it a useful tool throughout history. During the Stone Age of many cultures, jade was used for agricultural tools and weapons such as axe heads and knives. Jade has also been used to create musical instruments such as chimes, xylophones, and gongs. 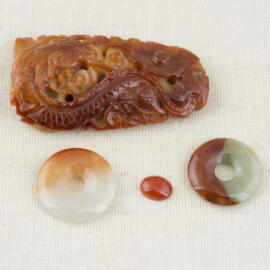 Jadeite was incredibly important to the Mayans and Aztecs. They used it for medicinal purposes and carved it into jewelry and religious artifacts.

When jadeite reached China for the first time in the 1700s, gem carving had already been a tradition for thousands of years. At that time, gem carvers worked primarily with nephrite, quartz, lapis lazuli, and wood. With the introduction of jadeite, the carvers switched focus from the previous materials to this new and beautiful gem. It was during this time, from the 1700s-1900s, that some of the most intricate and advanced jadeite carvings were made. Some of the carvings took as long as 10 years and a team of up to 50 carvers to make. Because of the incredible detail, many of these centuries old carvings are still unmatched in quality to this day.

Across the world, jadeite symbolizes prosperity, success, and good luck. The traditional jade flat disc with a hole in the middle, known as a “bi,” symbolizes heaven.

Gemology of Jadeite and Nephrite

Gemologically speaking, nephrite and jadeite are two different gems, with different refractive indices and chemical makeups. Both gems are silicates which basically just means that they are rocks. These particular rocks are made up of silicon and oxygen as the primary components, but the other elements are what make them special. The arrangement of these atoms in its crystal structure is what gives jade its extraordinary toughness.

At this point, it’s important to discuss the technical meaning of “toughness”. Toughness is a material’s resistance to fracturing, whereas hardness is its resistance to scratching. This may seem like splitting hairs, but it actually has a big impact on how gems are worn and what they can handle.

We all know diamonds are the hardest gem commonly available on earth. If you scraped them together, a diamond would scratch a piece of jade while the much softer jade wouldn’t leave a mark on the diamond. However, if you decided to smack both gems with a hammer (please don’t try this at home), the diamond would have a greater chance of shattering than the tougher jade.

Jade has been replicated and imitated over the years. The most common imitations by far are dyed quartz, glass, and plastic. These imitations can be identified quickly by a trained gemologist. Other stones that have been confused with jade over the years are chrysoprase, serpentine, maw sit sit, and hydrogrossular garnet.

For a short amount of time, a few laboratories produced synthetic (lab-created) jadeite. This proved to be unprofitable and was quickly forgotten; however, a small amount of it remains on the market and it is mostly undetectable

Treatments and Sources of Jade

Before the 1980s, dyed jade was not very common. New technologies that developed in the late 70s and early 80s made it possible to treat jade to look better than it originally was. Now that this technology has been available for decades, almost all of the jade on the mainstream jewelry market is dyed. Dyed jade is detectable using standard spectroscopy.

Another common method of treating jade is polymer-impregnation. This can be used in conjunction with dye to dye lighter colored material to a darker, more desirable green, purple, or orange. Finally, acids can be used to bleach dark material lighter and to reduce undesirable spots in an otherwise desirable piece of material.

Green nephrite is mined all over the globe, but the main producers are Northwestern China, British Columbia, and Siberia.

Myanmar (Burma) and Guatemala are the primary sources of jadeite.

Care and Cleaning of Jade

Both nephrite and jadeite can be damaged by the heat of a jeweler’s torch. Jade is generally safe in ultrasonic cleaners, but the treatments we just discussed can be damaged. Warm soapy water and a soft bristled brush are the safest ways to care for your heirloom jade.

Almost all jade is treated with wax to help improve its appearance. The wax fills pores in the jade, and can be damaged if cleaned with harsher chemicals or an aggressive brush. Wax can be reapplied if needed.

Whether you love to rich olive green of nephrite or the rainbow spectrum of jadeite, you can’t go wrong adding a piece of jade to your collection. You’ll be wearing a gem that has been used, carved, loved, and admired by people for thousands of years. Stop by our shop to see our unique collection of jade jewelry today or talk with one of our designers about making a custom piece just for you.

Home »
Fine Jewelry U »
Gemstones »
Gem in the Spotlight: Jade